Paul Webb, a former National Trust head gardener, returns to Forde Abbey gardens after fifteen years and remembers why he rates it as a great garden.

I guess all us head gardeners have our own ideas about what makes a great garden. Yes, on one level it is about the quality and pedigree of the plants, trees and shrubs and the design created for them. It’s also about being able to manage change and offer visitors something different to see and enjoy not just from year to year but from season to season. And like all the great estate gardens it’s about using the land in its natural form, its slopes and contours as well as aspect and light. But more of that later.

I first went to Forde Abbey gardens fifteen years ago as a bit of ‘know it all’ student.
I was on a blitz of visiting some West Country gardens and my mentor Roy Lancaster urged me to see Forde Abbey. I took to the place straight away. I loved the open spaces and remember especially the dahlias and the kitchen garden to die for with lines of hearty cabbages and lettuces forming patterns of intense colour and texture with dahlias and argyranthemums flowering alongside the central path.
I went back to the gardens for the first time on a blistering hot day in June a few weeks ago with my two boys who loved the informal layout of the gardens where there’s lots of room as well as hidden places for children to explore.
I still think this is one of the great gardens in this country.
It has clearly evolved and still evolving. Change is another of my factors which goes into creating great gardens. Planting with perennials for example will give you a choice of what blooms when and you can build a garden with different moods. If something blooms forever you stop appreciating it so you need to bring change into any garden and keep looking ahead. 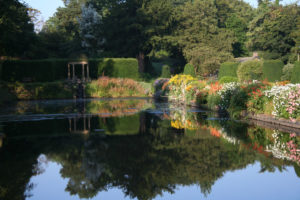 Water is a wonderful feature throughout here. The centrepiece of the whole garden is the Long Pond, which leads to a Tempietto, a small, domed temple at one end. There is a bog garden, and a series of cascades and canals known simply as The Ponds so you are never far from the beauty and calm that water brings to any garden. The bog garden I learn was made from a silted area of the Great Pond it employs the 800-year-old monastic leat and now produces a colourful display skunk cabbages (Lysichiton americanus) and early-flowering primulas (Primula rosea).
And of course there’s the wonderful powered fountain looking spectacular on the day we went which is a thrill to young and old.

I’ve always advocated not paying too much attention to colour but to focus on texture and size contrast instead and that’s what I think happens here and is done so well. Often people get caught up in a mantra of colour combinations and don’t think about anything else. So gardens can end up looking like perfectly matched outfits rather than inviting outdoor spaces. Nature doesn’t pay attention to colour so why create something which is so obviously unnatural.
Forde Abbey’s gardens extend over 30 acres and the informal layout of the gardens is one of its strengths. This isn’t a claustrophic planters’ garden but one full of open spaces where the lawns lead you from one area of interest to another. There’s beauty and interest throughout set off with ancient and mellowed stone walls. Some trees survive from the 1700’s although there have clearly been a lot added rhododendrons, azaleas, acers , magnolias and irises, Meconopsis and calocedrus decurrens and more. 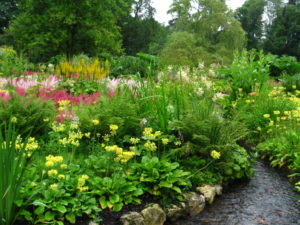 Along one side of the Long Pond runs a deep herbaceous border which is a high summer delight, a mix of asters, rudbeckias, eupatoriums and dahlias but I would guess offers something different in the autumn. There is more colour up on the Mount where the acidic soil is perfect for a variety of rhododendrons and azaleas, camellias and magnolias.

What I like about it more than anything is that Forde isn’t the finished article .
Most of the garden you’ll see if you visit was laid out by Sir Francis Gwyn in the early 18th century. It is still being added to and subtle changes made. A new willow area is now in place and starting to look spectacular in the structure it brings.
A garden is never the finished article, but more like a chapter that is constantly being written, re-written and edited to bring improvements and changes however subtle which will bring the visitor back for more.

This feature is taken from the August 2017 issue of Country Gardener magazine.

You can find out more about which cookies we are using or switch them off in settings.

This website uses cookies so that we can provide you with the best user experience possible. Cookie information is stored in your browser and performs functions such as recognising you when you return to our website and helping our team to understand which sections of the website you find most interesting and useful.

You can adjust all of your cookie settings by navigating the tabs on the left hand side.

Strictly Necessary Cookie should be enabled at all times so that we can save your preferences for cookie settings.

If you disable this cookie, we will not be able to save your preferences. This means that every time you visit this website you will need to enable or disable cookies again.